Frozen's success has been nothing more than inspiring and infectious as Disney continues to gain success from the movie. Now a Golden Globe winning movie, the hit is now being seen to be taking the Broadways stage.

Other successful Disney movies have been able to move to the Broadway stage. Lion King, still one of the best productions Broadway continues to see still tours, while Mary Poppins and Beauty and the Beast is also another that has come to the stage. Now seeing Frozen, it has made its way into the talks of becoming the next of the Disney movies turned to the stage.

While there is no set date on when it will make its move, CEO Bob Iger says "We're not demanding speed, we're demanding excellence".

Frozen's soundtrack is number one on Amazonand iTunes.
Posted by Rhod Freeman at 4:43 PM No comments:

On August 22, 2013, the Disney Company released that the fifth installment of the blockbuster hit, Pirates of the Caribbean movie franchise, will be named Dead Men Tell No Tales. The theme of the ride itself has used this saying over and over and is echoed through the scenes where Davy Jones erupts from the water in the ride. As he said, "they do tell tales".

The movie will be released in 2015, with themes of a ghost, farming romantic duo, and a new romantic lead who will be suspected of witchcraft.
Posted by Rhod Freeman at 3:09 PM No comments:

Watching Hercules today and I think everyone loves this villain whether the movie has been seen or not and has been equated to one of the greats. Hades, being one of the largest villains of not only the Disney world, but also one of Greek themed movies. His sass in his lines, the way his anger had been portrayed. People have been able to relate to him not just because of the way he speaks and his words, but because of how you work so hard for something and one person comes in a sweeps us in.

With James Woods as the voice, Hades has been one of our favorites from the Disney Renaissance era.
Posted by Rhod Freeman at 3:05 PM No comments:

I recently got into a large discussion with this person on Instagram. I talked about how each castle was dedicated to its own princess. Now, not many might know whose castle belongs to who. So, with that being said, I plan to show not only the castles from around the world, but also to relay which castle belongs to which princess.

Now, much to the surprise of myself, I looked further into which castle belonged to who and it seemed that not only the original park, Disneyland in California, the Disneyland Hong Kong was the same castle. It is said that they are almost exactly the same in construction and color, but only changed by the shades of color they put on the top of the castle.

Now, much like how the Disneyland Castle and the one in Hong Kong share a castle to a princess, the same happened with the one in Florida at Walt Disney World as well as the one in Toyko Disneyland. Sharing this one characteristic the two castles were dedicated to Cinderella. While being in the center of the park for both of the parks, this castle in particular also serves as the logo for the Walt Disney Company and its affiliates. The castle in Florida is much different to its counterpart though. Cinderella's Castle in the Year of a Million Dreams had become a place where you could sleep and enjoy the castle and look upon the park while you slept. The castle in Tokyo was much like the one in California where you could go through the castle and experience the story of Cinderella, but this ended in 2006.


Posted by Rhod Freeman at 2:48 PM No comments:

The Festival of Fools 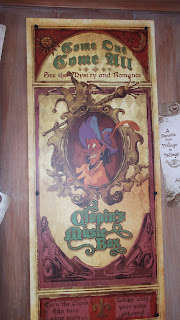 So, I was thinking lately about the Hunchback of Notre Dame. I hadn't seen the movie in a while and while I always had seen the music box in Disneyland's newest land Fanatasy Faire, but I had thought about what had happened to the whole idea behind the festival? I happen to think there could be a lot more done with this aspect of the story.

So, I decided to do some digging and look to see if there was anything done with the Hunchback's story and the theme of the Festival of Fools. I found that there had been in 1997, around the release of the movie, Disney had built a stage, and a show which was used for the Festival of Fools.

It is interesting to watch and according to the YouTube video which I will link here they also have kept the stage area, but have decided to only use it for corporate events.

What do you guys think? Could there be a revival of the movie's themes? Could there be a Festival of Fools themed parade? I personally would love to see a float given in the Soundsational Parade. But again, what are the thoughts you guys have?
Posted by Rhod Freeman at 2:03 PM No comments:

The Beginning of an AVATAR themed land...

So, being out of the loop that I am, I am trying to explore all the different things about Disney and what are the new things coming about in the theme parks. It seems that Florida is having its big debut as the Disney Company broke ground in the Animal Kingdom to make the park "become an all day park". The transitions they said they are trying to bring to revamp the park is adding this new land which is based off the largest grossing movie in the world "AVATAR". Guests will be able to go to Pandora and ride some amazing attractions. Most of all, they will be able to see the beautiful plant life grow when night rolls around. It looks very exciting, and another reason I want to go to the parks!

The execs also make a hint that there is going to be a new nighttime show that will take place at the park as well!
Posted by Rhod Freeman at 8:59 PM No comments:

I don't know if this is a recent addition, or it was added in December of 2013, since I am an avid supporter of this show at the park. I love this show, and someone who has studied every movement of that show, soundtrack, everything (trust me, I see when things go wrong now, and if actors are being unprofessional, *like today*) and there are two changes that I saw in the show that they added.

The first, when the Lilo and Stitch portion of the show comes up, they have now added a Stitch character who comes on stage and acts how Stitch would in the situation. It is a really fun portion to watch as he dances as well.

The second change is that at the end of the show, Mickey reappears not in his apprentice attire as he is in the whole show, he changes to look like the rest of the cast.

Not huge changes, but changes that add to the show and make it that much better. Make sure you check the show out! They do it everyday at the parks!
Posted by Rhod Freeman at 7:29 PM No comments:

Rhod Freeman
I have been a Disney fan since I was a child. Loving the movies and the parks since I was little. I love to learn more about the history of the parks and all of that stuff. Disneyland is my home and I love it as much as I love my other hobbies.